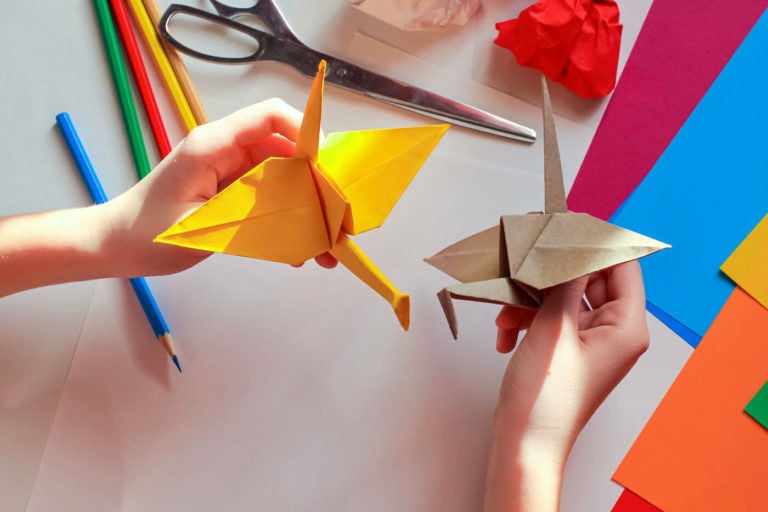 What is National Origami Day?

National Origami Day is when we honor the Japanese art form of origami November 11th each year. Origami is the ancient Japanese culture of paper folding. It requires intricate folding and makes complex shapes out of square pieces of paper.

Paper was invented in China and taken to Japan by Buddhist monks during the sixth century. The Japanese developed origami into a very detailed art form. Most origami instructions were initially passed down in tradition orally instead of having handwritten instructions; those were later created so that the tradition could be preserved.

How Does Geometry Relate to Origami?

Origami relates to geometry in many ways! The most basic way it can be related and taught to students is with two-dimensional and three-dimensional shapes. It can also be connected to lines, angles, the different types of triangles, symmetry, perimeter, area, and volume. You can teach and incorporate origami into geometry activities to make it fun and engaging.

An easy place to start with kids would be three-dimensional nets to fold them into the actual shapes that they need to learn about through these classroom activities. Then have students fill in a chart to tell how many faces, edges, and sides each three-dimensional shape has.

Make Your Own Dice

Students can fold a three-dimensional cube that makes a large die and then use it to play a math game! Here is the template for the die.

Games that can be played with the dice are as simple as asking two students to work together, roll the cube, and add the numbers: play for five rounds, then add all the numbers together. Whoever has the highest number wins. You can do the same thing for subtraction and multiplication. If you are working on place value, you could have students roll up to six of them, make a number, and complete a place value chart.

You can have students make fun, animal origami shapes and then have them do mathematical activities with them, such as measure the angles that make up the animal, tell how many triangles it has, and tell what types of triangles it has. Here are three great tutorials for easy origami projects:

Students can make cute Halloween and Thanksgiving origami and tell how many different shapes make up the figure:

By using three-dimensional nets of cubes and rectangular prisms, students can learn more about the concept of volume. Once students make the shapes, have them fill them with centimeter cubes.

Then teach a lesson on what volume is and have students count the cubes to determine the volume. This will serve as a foundation for their understanding when they learn the formula and have to find it without using manipulatives.

You could have students create their origami how-to video with accompanying directions and drawings. This might be easier for students with a partner, or group, to provide someone to bounce ideas off of and record each other. Be sure to give the students a rubric so they know what is expected from the assignment.

Have students think of ways that origami is related to geometry or math in general and share their ideas creatively, such creating an infographic or comic strip. There are some great apps for creating these, such as Canva and Toontastic 3D.

To have students practice finding areas, you can have them trace a three-dimensional net onto graph paper. Then have them use this to break the net down into manageable parts, calculate each part’s area, and add the parts together to figure the total area. At the end, they can then fold the net into a three-dimensional shape.

The most important thing is to use origami to have fun teaching whatever skills you want to incorporate with it. Students will love it and learn a lot at the same time!